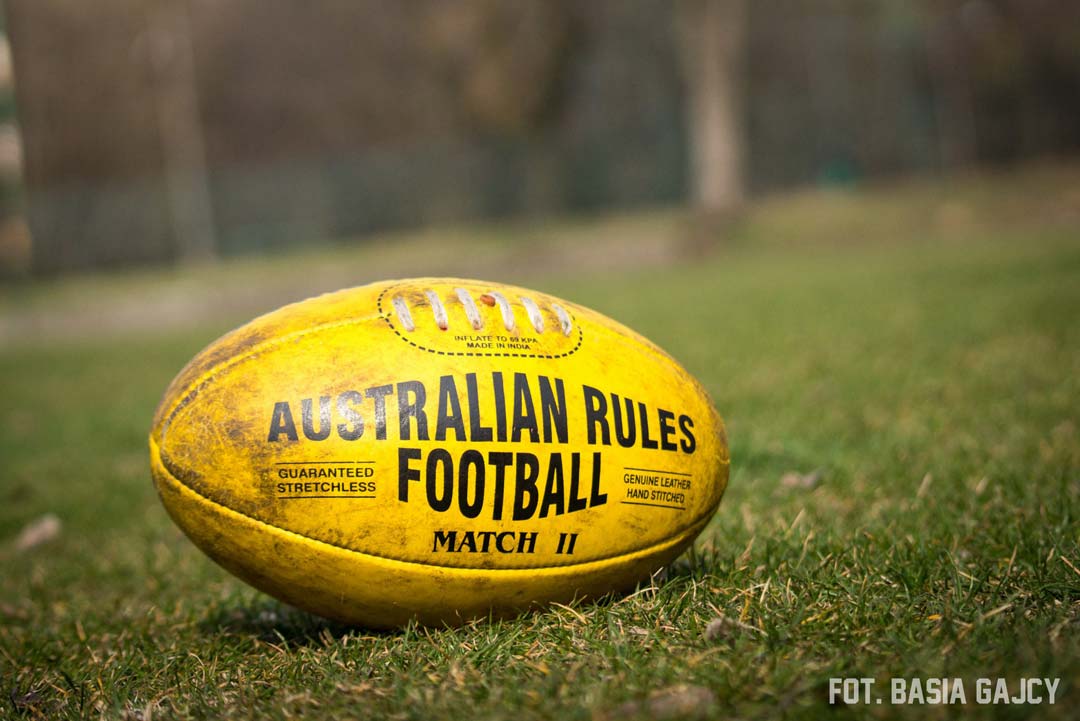 Fast paced, high scoring, flying through the air to catch a mark, Aussie Rules is the ultimate in pure sports excitement. Have you never heard of Australian Rules Football? The Polish Devils are introducing the sport to Poland!

What is Australian Rules Football?

Australian Rules Football was born in Melbourne but is played across Australia via the Australian football league (AFL). Footy (as it is endearingly called) origins date back to the 1850s.

A way to keep cricketers fit in the offseason.

But Aussie rules is nothing like cricket. It is, however, played on a cricket field in Australia. There are 18 players per side with 4 substitutes on the bench.

The ball looks like a rugby ball, which moves in any direction by either running, kicking or a handball. A handball is similar to hitting a volleyball. A player scores by kicking the ball between posts. 6 points for a kick through the inner posts or 1 point for the outer, called a behind. You can stop play by catching the ball from a kick by either side longer than 15 meters. A player can, even, use another player to gain a height-advantage catching the ball (a mark). The game starts with the bounce, which may remind you of a basketball jump-ball.

The AFL assists with the international development of the game. In Europe, the governing league is AFL Europe. They made minor changes to the rules, including playing 9 per side.

In Australia, AFL draws crowds near 100,000 spectators. It is the 4th highest attended domestic sports league in the world. The fans are insane fanatics, and the atmosphere belongs on anyone’s sports bucket list. Rivalries such as Carlton-Collingwood, Essendon-Hawthorn, live strong. Finals turning into brawls (one nicknamed “The bloodbath before the bloodbath”); come from behind wins after being down 44 points at halftime, cross-city rivals are all apart of the drama of the game. It is a tough sport.

Footy’s introduction to Poland began last November when 5 Australians and an American set the goal of fielding the first ever Polish National team for the Euro Cup. The first practice had 5 players on a dog field in Pole Mokotowskie. They are now supervised by an experienced coach who is assisted by a professional strength and conditioning coach and physiotherapist. The Devil’s goal will be met, and the team is booked to fly to Sweden to compete against 17 other nations in June. Their work has only begun. With 6000 registered players (Men and Women), 2500 juniors, and many domestic leagues in Europe, the development of Footy in Poland begins with the talent and drive of the culture. The Devils believe the strong Polish work ethic and curiosities will help them build a competitive team for future years. Approximately 20 players (half Polish) attend the training every week at AWF.

They would like to see the sport grow around the country, and plan on holding trainings in cities outside Warsaw.

The Devil’s are an inclusive team welcoming men, women, and juniors who would like to try kicking an odd shaped ball; interested in Australian culture fan or player.

All photos by Basia Gajcy

Translation to Polish by Marta Nozdryn-Płotnicka.

On OddUrbanThings, we provide up-to-date info about the coolest events and the best stuff to do in Warsaw.

Start typing to see results or hit ESC to close
For tourists warsaw upcoming events Guest Contributions Eugenia Jacenty
See all results
We use cookies. If you accept the use of cookies, click ok.OkRead more